At the AREX LAX meeting last Saturday, Brian N6CVO gave a very interesting presentation on "Pico Balloons," small balloons with payloads so small that the entire vehicle–balloon, electronics, and antenna–is less than 20 grams. I was attending the CVARC General Class Session, but I watched the presentation later, thanks to David Goldenberg W0DHG, who posted it on the HamRadioNow YouTube channel. I was interested to learn: 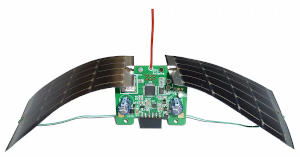 There are lots of tracking modules available, such as the ZachTek WSPR-TX Pico Transmitter, and lots of DIY possibilities using open source software.

Pico Ballonists use dime-store balloons or more expensive scientific balloons like the SBS-13.

At the time of his presentation, Brian's N6CVO-13 balloon was still aloft after 86 days and 4.5 circumnavigations. He polls WSPRnet and repeats the data to aprs.fi, so we can track N6CVO-13 there.

When I wrote about the WB6TOU-11 Circumnavigation, I didn't realize pico balloonists almost never recover their vehicles. Still, I can see they learn a lot from each flight!