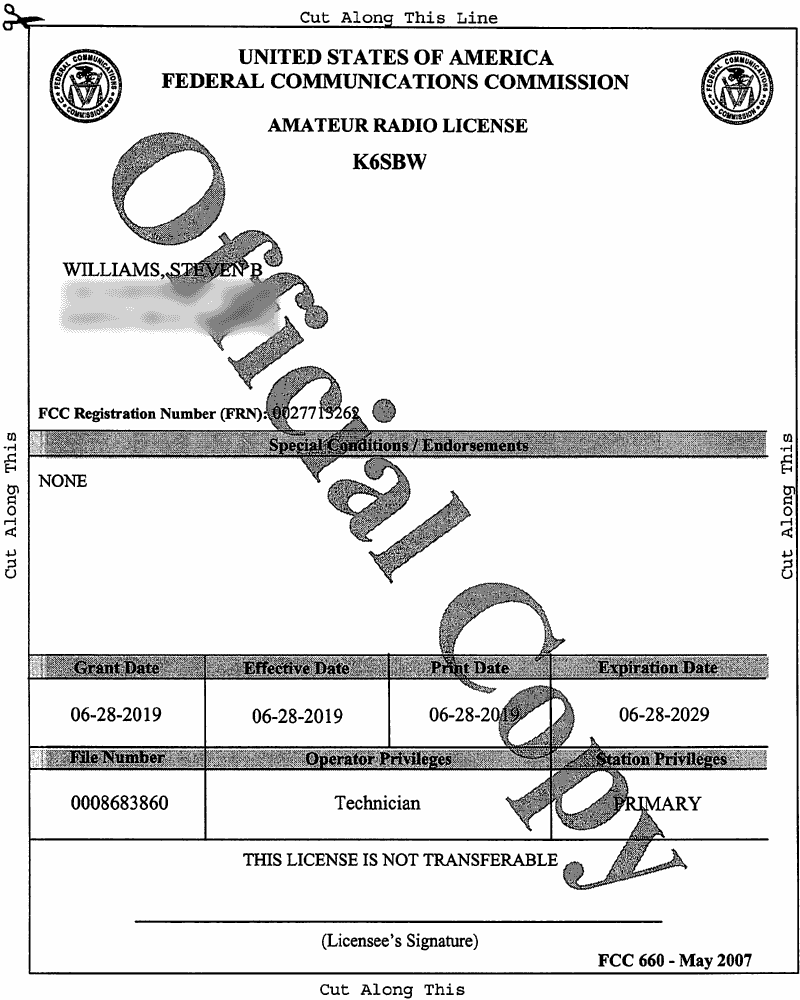 In August, 2018, I finally obtained my FCC Amateur Radio (HAM) license. My call sign is K6SBW.

I'm primarily interested in learning about packet radio. But who knows, I might set up a voice rig in my camper!

Programming Software and Cable for FT-70D

Bob Fike KO6XX also recommended the RT Systems programming software and cable for the FT-70D, so I bought it.

It's way too expensive, $49 for the software and cable. But it fills a gap in the Yaesu product experience: I'm told it's difficult to program out of the box. So RT Systems is providing a service, but of course I'd prefer an open source approach.

I haven't installed the software or even looked at the instructions. Bob programmed the Santa Cruz area frequencies into my HT before one of the classes, and I've been monitoring the local repeaters successfully.

Based on a recommendation from Bob Fike KO6XX, one of the instructors at the class last Wednesday, I purchased a Yaesu FT-70D. It's charging here on my desk, and I'm looking forward to continuing to learn what the heck to do with it.

Looking through the manual, I didn't see any explanation of how to configure it over USB. Maybe I missed it. I'll ask Bob when I can.

I'm also curious how to update the firmware and how often it needs updating. Anymore, I'm not completely comfortable with anything that doesn't run on open source. I'll be curious to learn whether Yaesu supports open source developers or whether any developers have just rooted it!

I already got the Yaesu speaker mic and an extra battery.

I'll wait until I can get more specific recommendations for the antennas. For the magnetic mount antenna, I believe this an appropriate adapter.

Since my primary vehicle is a VW camper with a fiberglass roof, a magnetic mount antenna might not be best. I saw a Vanagon the other day with a HAM antenna, but I didn't note the details of the installation. More to learn!

I've signed up for an Amateur Radio Licensing Course offered by the Santa Cruz Public Libraries, at the Scotts Valley branch, six Wednesday evenings May 29-July 3.

I was excited to come across this course, even though I already have a license. The SMRS course last August was a great way to get the license quickly, but I still don't know enough to get started. I see the license as a license to learn, and that's what I'm trying to do now.

The upcoming course is free, including a copy of the textbook, 2018-2022 Technician Class. When I tried to sign up, the class was full, but I jumped on the waiting list. A few days later, a librarian emailed me to ask me to come pick up the book, and a few days ago another email included a syllabus and six workbooks to work through before each class.

I hope this will be a good way to actually get started in the hobby!

On January 24, ARRL announced a new podcast for newcomers to amateur radio like me, "So Now What?". The podcast is "aimed at answering your questions, providing support and encouragement for newcomers to get the most out of the hobby."

I listened to the short intro episode, and I started listening to the first full episode of March 21. I'm looking forward to listening more!

The RSS feed is served by Blubrry, a subsidiary of RawVoice. The "About" pages on Blubrry and RawVoice claim they follow fair policies that put podcasters in control. I hope that's true!

A thread on the AMPR discussion list yesterday altered me to Chattervox, which is described as an "AX.25 packet radio chat protocol with support for digital signatures and binary compression. Like IRC over radio waves."

I sorta know what that means. Anyway, something to read more about.

One angle I'm particularly interested in is that such a chat must be unencrypted. Quan Zhou, who posted the AMPR thread, said, "In the United States, it's illegal to broadcast encrypted messages on amateur radio frequencies. Chattervox respects this law, while using elliptic curve cryptography and digital signatures to protect against message spoofing."

That makes sense. Digital signatures are just cryptographic signatures that can be used to prove the sender of an unencrypted message. (Of course, it'll be interesting to see whether Chattervox speaks to public key exchange.) And there are lots of compression schemes that leave the message unencrypted.

But I haven't yet dived into Chattervox to understand how, as Quan Zhou says, it uses "elliptic curve cryptography" if not to encrypt messages.

Today I received an email from FCC with a link to a PDF containing a new version of my license with a vanity call sign, the first I listed in my application: WA6SBW!

To celebrate, I registered a new domain, WA6SBW.net, which you're reading now. Why dot-net? Well, because I'm more likely to become active in packet radio, that is, routing internet traffic over amateur radio repeaters, than traditional voice or morse code. But we'll see.

As expected, today I received an email from FCC with a link to a PDF of my Amateur Radio license.

FCC assigns new licensees an algorithmically-generated call sign. I wanted a cooler call sign than the one I was assigned, so I looked into FCC's Vanity Call Sign program. ARRL has a good explainer on the program.

I wasn't clear on the naming convention used for call signs, so I spoke to one of the SMRS volunteers, who jumped into the FCC call sign database and suggested a couple of available call signs that end in "SBW."

I applied for one those call signs, so I look forward to a response from FCC shortly.

The class was run by volunteers from the Sonoma Mountain Repeater Society. SMRS also administered the test after the session. The session took place in the "Community Room" of a building in Petaluma, California, a venue donated by a local company who has all of their employees obtain HAM licenses from SMRS.

I passed the test! The license I earned is Technician, the first license level. Beyond Technician, there are General and Amateur Extra licenses. Those tests are harder, and the licenses offer more privileges.

The SMRS cram session doesn't try to teach any theory, it just presents about 200 test questions and answers for applicants to read through, remembering what we can. Then the test is 35 of those questions, multiple choice.

One might say that's not really a valid way to get a license, but FCC apparently tolerates it. SMRS has passed thousands of students over the years. SMRS and the Amateur Radio Relay League (ARRL) offer many more ways to actually gain the knowledge needed to build and operate a radio station legally and correctly.

I have a lot of electronics and avionics experience, including a shallow understanding of radio, so it was quite easy for me. Someone without that background could easily pass the test, but they'd have even more learning to do after.

Amateur radio is limited to purely non-commercial activities. ARRL lobbies FCC to keep it relatively open to people interested in using it, but you can't get paid in any way.

I decided to finally get a license because I'd like to experiment with Packet Radio, a technology that routes data over radio. People like me use Amateur Packet Radio Network (APMRNet) to build and use gateways to the internet over the amateur radio bands.

I was surprised to read in the test prep materials that encrypted data over packet radio is prohibited by FCC. Or at least, I think I understood that right. That severely limits its usefulness, even for non-commercial activities, but I look forward to learning more.